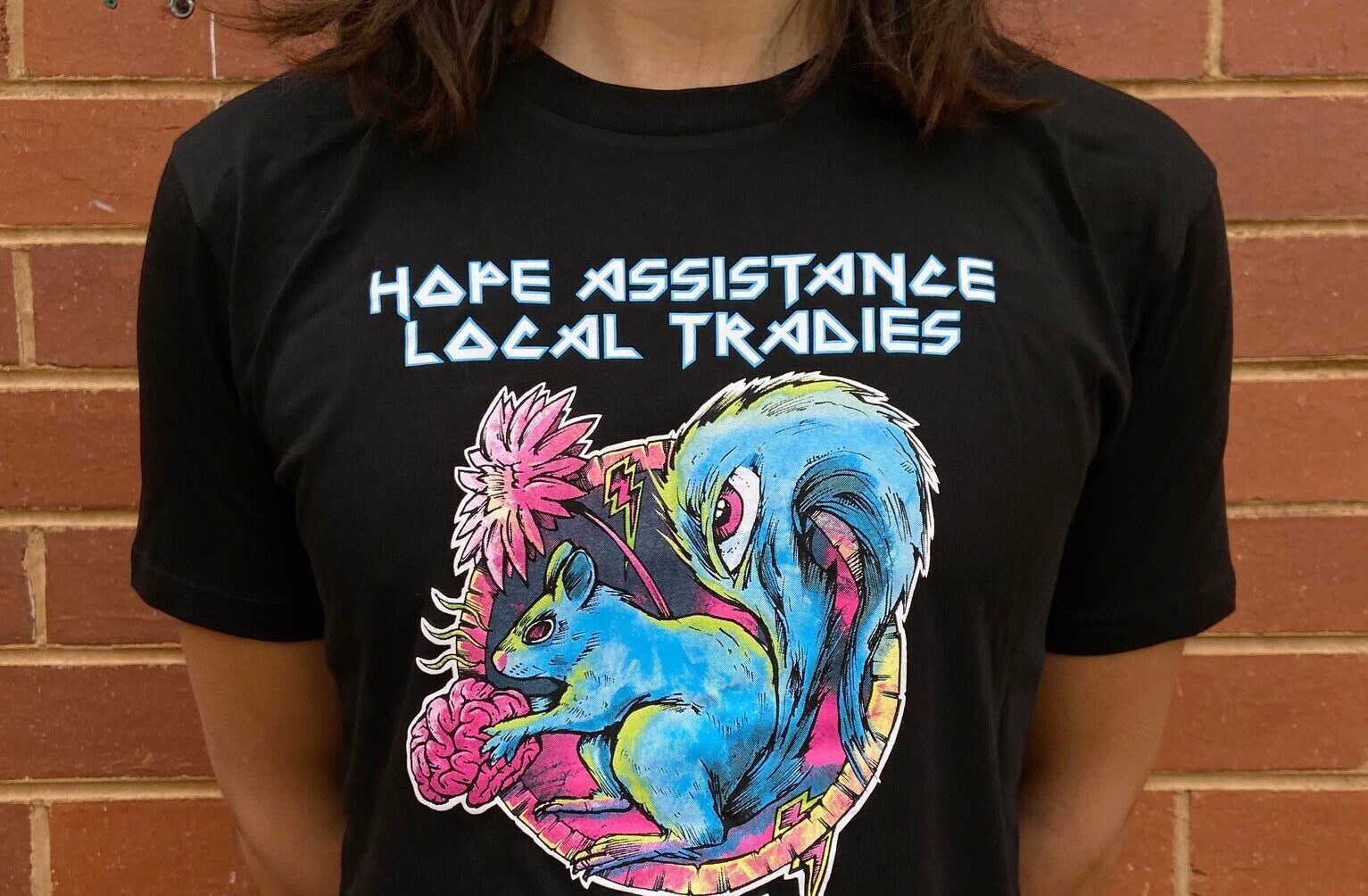 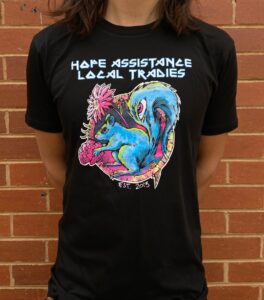 In this first edition of the Guest Artist Series, HALT have teamed up with Ray Ahn; bass player and illustrator for legendary Sydney punk band The Hard-Ons, and Simon Robins; vocalist in thrash band Pissbolt and renowned comic book colourist. Both artists are proud to use their art trade to support the work of HALT.

The humble band tee is an often-overlooked art form but provides the perfect canvas for these artists to interpret the HALT message. While you won’t see band shirts up at the National Gallery, you will see them on every street and that’s where HALT can typically be found promoting mental health.

By wearing one of these tees or hoodies you won’t just look great, you’ll also be encouraging tough conversations in your community. You can purchase them from HALT’s online shop. 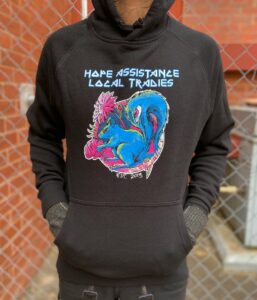 Ray Ahn – Original drawing
Bass player for legendary Sydney-based punk band The Hard Ons, Ray is also responsible for the bulk of the art adorning their extensive back catalogue and countless T-shirt designs. Since beginning in the early 80’s, Ray’s art and music has gained a cult following worldwide and he shows no signs of slowing down. He lives in the Western suburbs of Sydney with his wife and two kids.

Simon Robins – Colourist
Simon Robins lives in Fryerstown with his girls and faithful mutt Macey. When not colouring comics he can be found screaming at the sky in thrash band Pissbolt. Some recent projects of his include the murder mystery comic Skyscraper, the zombie family drama Undad, Digitopia; a complex political action/drama comic, the all-ages space opera romp Oswald and the Star Chaser, Slumber; a nightmare busting detective rollercoaster, the intriguing neolithic mystery Hatch Effect and The Exoneration of Dr Fu Manchu.

HALT is passionate about providing tradies with the tools to have tough conversations about mental health and to support their mates when they’re going through challenging times.

Our ‘Save Your Bacon’ brekkies and other events are delivered in person or online to tradies in their workplaces, hardware stores, sporting clubs, Men’s Sheds, TAFEs and emergency services
across Australia.

Participants will leave the event with increased knowledge, confidence and skills in the following key areas:

Talk to us today about hosting a FREE ‘Save Your Bacon’ Brekky or other event at your workplace, club or organisation. We can cater our events specifically to meet the needs of your team, at a time that suits you.

HALT builds the bridge between both local and national support services for people at risk of suicide in the local community.

That is, to facilitate the spreading of information and raise awareness of groups such as Lifeline and Beyond Blue, open up conversations and break through the stigma attached to mental health.

We have identified a need for greater support for people at risk, especially men in ‘tradie’ occupations, although we recognise the need for such support is broad.

HALT's vision is that every tradie in Australia knows how to look after their mental health and wellbeing.

If you or your company/organisation would like to host an online or in-person HALT 'Save your Bacon' event, a HALT Toolbox Talk, or would just like more information on HALT and what we can offer, please fill out the form below.