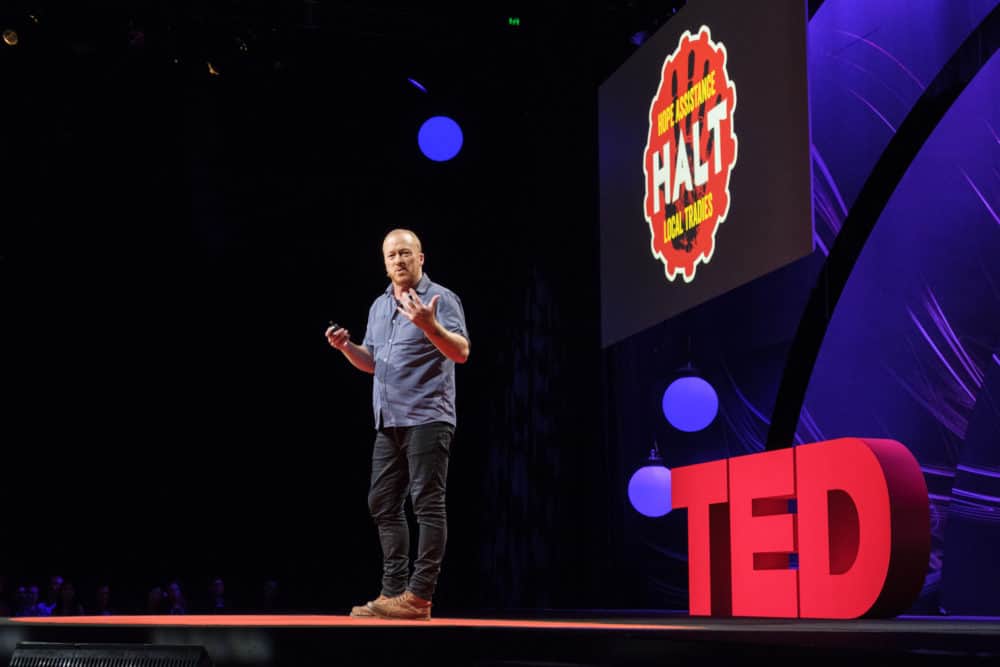 On the 11th of December 2017, HALT founder Jeremy Forbes was fortunate to be one of fifteen speakers chosen from across Australia to speak at the TED@Westpac event at the Hordern Pavillion in Sydney, an opportunity made possible through the Westpac Social Change Fellowship.

Jeremy’s TED talk was about the need for a whole-of-community approach to suicide prevention. In his talk, titled ‘The stereotype of the superstrong macho male can be fatal’, he spoke about HALT’s origins in Castlemaine and the bigger picture of what we can do as a community to reduce alarmingly high rates of suicide. He was well supported by the TED team and hosts Adam Spencer and Cyndi Stivers, and found it to be an incredibly powerful experience.

It was exciting for Jeremy to have the opportunity to deliver a TED talk that will hopefully enable his message to go global. The talk is available to view on ted.com and on TED’s youtube channel.

HALT is passionate about providing tradies with the tools to have tough conversations about mental health and to support their mates when they’re going through challenging times.

Our ‘Save Your Bacon’ brekkies and other events are delivered in person or online to tradies in their workplaces, hardware stores, sporting clubs, Men’s Sheds, TAFEs and emergency services
across Australia.

Participants will leave the event with increased knowledge, confidence and skills in the following key areas:

Talk to us today about hosting a FREE ‘Save Your Bacon’ Brekky or other event at your workplace, club or organisation. We can cater our events specifically to meet the needs of your team, at a time that suits you.

HALT builds the bridge between both local and national support services for people at risk of suicide in the local community.

That is, to facilitate the spreading of information and raise awareness of groups such as Lifeline and Beyond Blue, open up conversations and break through the stigma attached to mental health.

We have identified a need for greater support for people at risk, especially men in ‘tradie’ occupations, although we recognise the need for such support is broad.

HALT's vision is that every tradie in Australia knows how to look after their mental health and wellbeing.

If you or your company/organisation would like to host an online or in-person HALT 'Save your Bacon' event, a HALT Toolbox Talk, or would just like more information on HALT and what we can offer, please fill out the form below.